Posted at 11:27h in interviste, Storie by Molto Collectibles 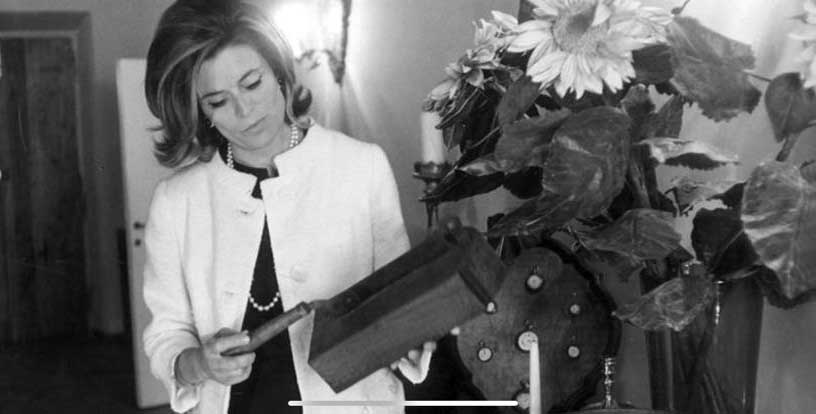 Fascinated by the life and work of the Milanese designer, who passed away in 2017, we had the opportunity to imagine an interview with her, filtered by the memories and words of her daughter Elisabetta.

Where does the combination of creativity and functionality that uniquely characterizes Crespi’s production come from?
Gabriella’s mother, Emma Caimi-Pellini, a jewelry designer, won the second and third prize in the “Bijoux d’utore” section at the Milan Triennale in 1950. Her father, on the other hand, was a mechanical engineer. This double path – between fantasy and technique – continued to develop over the years of Crespi’s studies: she first graduated from the Art School of the Brera Academy and then attended the faculty of architecture at the Milan Polytechnic.

How did your career as a designer start?
Imagine the Milan of the fifties where the houses of the upper middle class were being enriched with unique objects and particular knick-knacks that could be exhibited. In this context, influenced by the passion for details, materials, unusual shapes, Crespi begins to create handcrafted objects such as boxes bordered with friezes, or papier presses with applied antique emblems and clocks, which she sells to friends. She soon began her collaboration with some Milanese artisans for the creation of objects – such as brass lamps, boxes and sculptures – which are based on solid craftsmanship, but are animated by her inexhaustible creativity and a good dose of spirituality. “For me, matter is first of all shaped by thought and by that unconscious part that is so important in us, not separated from a reality of current life that can determine its realization” (Gabriella Crespi for Il Mobile, December 1983)

What materials did she use?
You used wood and lacquers, combined with metals with a precious effect such as golden brass and stainless steel, but also crystal, marble and bamboo arranged in very long rays. About bamboo you once said: “I love the rush / It rises towards the sky looking for the Infinite / and in the wind like a humble son of the earth he bows”.

What relationship did you have with the Eternal City?
Rome has meant for Crespi a rebirth after separation from her husband, freedom, refuge, new entrepreneurial impetus: the wonderful location she chose for her showroom in Palazzo Cenci soon becomes a point of reference for the Roman aristocracy. Hence her success also extends internationally. Her creations enter the residences of illustrious personalities of the time, such as the Shah of Persia and Princess Grace of Monaco and a series of events that are organized abroad, from that of Dallas in 1968 to that of New York over twenty. years after.

Were the objects and ‘inventions’ of Crespi the subject of counterfeiting?
Gabriella Crespi’s creations are exclusive, often unique pieces or produced in a few copies, signed and numbered. Her furniture is all patented. The meticulous Italian craftsmanship is evident in the ingenious mechanisms that ensure operation and every detail is taken care of until perfection is achieved. This is why the “Gabriella Crespi Archive” was born in 2012 with the aim of protecting the designer’s creations. Her daughter Elisabetta has cataloged over two thousand works designed by her mother since the mid-1950s. The Archive also provides for the authentication of the artist’s works, thus guaranteeing their authenticity. Postmodern furniture, multifunctional furniture, surprise furniture, decorative furniture.

What could be the right definition?
“It is rare that my furniture has only one function; this feature comes from a great and continuous search for infinity. And this is why my furniture-sculptures move lightly in space, whether they are made of brass, steel, carved in large blocks of wood or stone, or of humble bamboo cane. ”

Charismatic, strong, creative woman, surrounded by worldliness, yet a part of her was prone to silence and sought solitude?
Already as a girl in Scotland or in Brittany she was looking for moments of solitude and silence. For her whole life she will tend to this silence, which is a moment of interior research, of spirituality, and which will lead her to live almost permanently in India for about twenty years.

Today Turin dedicates an exhibition to him. To find out more go HERE.